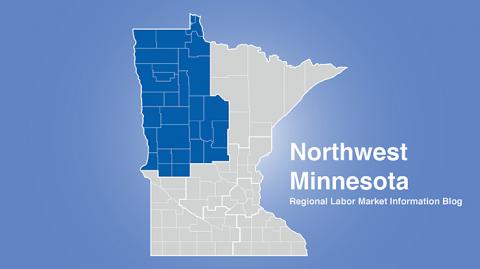 Northwest Minnesota is projected to attain 4.2 percent job growth between 2016 and 2026. That places Northwest in the middle of the pack for planning regions in terms of regional employment growth, well ahead of slower-growing regions like Southwest and Northeast, but well behind fast-growing regions like the 7-county Twin Cities metro area and Central Minnesota. Overall state employment during this time period is projected to grow 5.9 percent, while projected U.S. growth rate was 7.4% for 2016-2026. (See Figure 1).

A closer look at industry projections show a more nuanced picture for Northwest Minnesota’s future economy.  The region is expected to expand by 10,961 jobs by 2026, led by considerable increases in the health care and social assistance industry.  This sector is projected to add 3,707 jobs by 2026, a 10.3 percent growth rate.  The next leading industry is manufacturing, which is expected to grow by 6.6 percent, or an increase of 1,885 jobs over the next 10 years.  Both of these industries have average annual wages that are higher than the total for all industries.  The wholesale trade and construction industries are also higher paying sectors that are projected to grow by more than 1,000 jobs.

At the other end of the spectrum, the retail trade industry is projected to lose 1,168 jobs by 2026, a 4.1 percent decrease in employment.  With the rise of online sales, brick and mortar retail stores are struggling and this is expected to continue into the foreseeable future.  Educational services, which is the third largest employing industry in Northwest Minnesota, is also expected to decline in employment, with a loss of 337 jobs (Table 1). 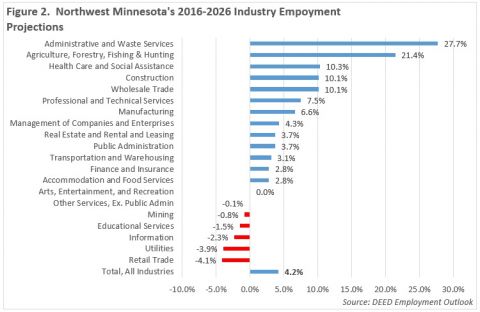 Overall, 13 of the 20 industry sectors in Northwest Minnesota are projected to grow.  Data shows that health care and manufacturing will lead the way in economic growth in the region while some sectors, like retail trade, will deal with economic realities and respond with fewer employment opportunities.

Underlying demographic trends, namely the aging of the population and limited immigration, will restrain the growth potential of the region’s economy. Yet, there remains plenty of opportunity in tomorrow’s economy, according to DEED’s recently updated Employment Outlook, which  includes employment projections that span from 2016 to 2026 and are compiled by both occupation and industry for the state and for the six regional planning areas.