Where Do Graduates of Northeast Postsecondary Schools End Up? 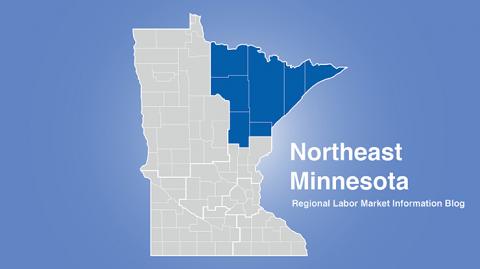 There are of course many factors that go into a graduate’s decision to leave or stay near their school, including the employment options in the region and the type of school itself. What these data do not show is the number of students that commuted, perhaps over regional boundaries, became self-employed, employed in another state, continued their education, or completed online programs from outside the region. (See https://www.citylab.com/life/2016/03/which-metros-are-best-at-keeping-their-college-graduates/473604/). The update to this CityLab article discusses the influence of online programs on the graduate retention rate for the Phoenix MSA.)

However, the GEO tool does provide the very useful capability to look at which regions and industries graduates find employment in within Minnesota. This allows for the potential analysis of employers and industry makeup as factors in the regional school-to-employer pipeline. Regional employers interested in tapping into local institutions might benefit from a deeper look into these influences on prospective graduates.

Fond du Lac Tribal & Community College appears to serve its local community particularly well. Of the four instructional programs offered by the school, 88 percent represented the highest share of graduates employed in the region two years after graduation, while 67 percent was the lowest.

At a more detailed level, GEO can tell you what percentage of recent Business, Management, Marketing, and Related Support Services majors from the College of St. Scholastica were employed in the Northeast Minnesota region two years after graduating: the answer is 31.1 percent. (Percentages are based on employed graduates from school years 2013, 2014, 2015, 2016.) This compares to 41.9 percent of graduates employed in the seven county Twin Cities region (see Figure 1). Institution-wide, a slightly smaller share of CSS graduates were employed in the Twin Cities and a slightly larger share remained in the Northeast (see Figure 2). 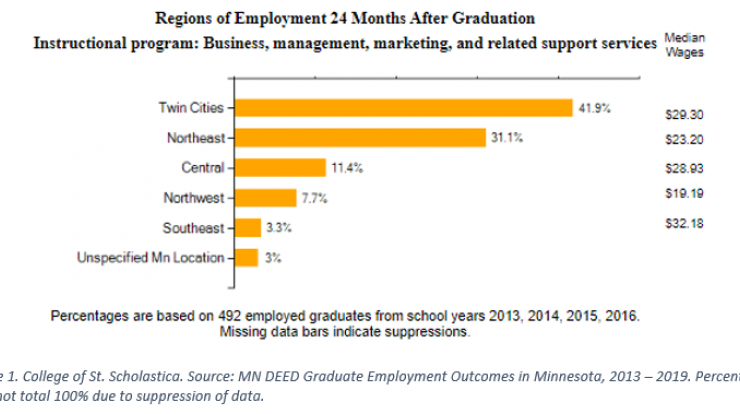 Figure 1. The College of St. Scholastica. Source: MN DEED Graduate Employment Outcomes in Minnesota, 2013 – 2019. Percentages may not total 100% due to suppression of data. 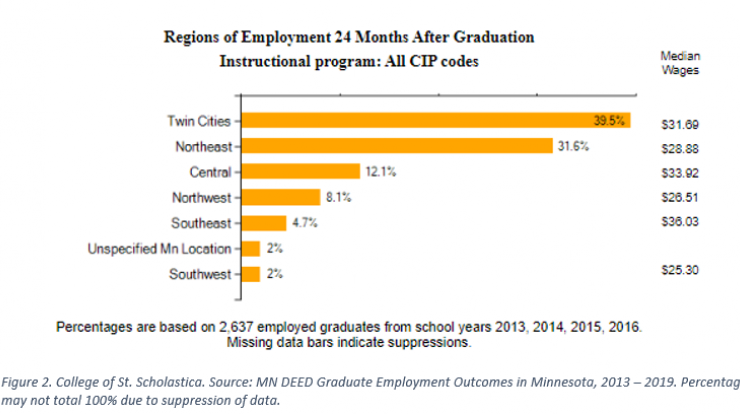 Recent graduates of the University of Minnesota Duluth also tend to land at jobs in the Twin Cities at higher rates, except from three instructional programs: Area, Ethnic, Cultural, Gender, and Group Studies, Engineering Technologies and Engineering Related Fields, and Public Administration and Social Service Professions. More than half of all employed graduates were reported employed in the Twin Cities Region after two years (see Figure 3). However, separating graduates by award (i.e. certificates, associate degree, bachelor’s degree, and graduate degrees and certificates) yields a more nuanced picture. Almost 45 percent of graduate degree and certificate recipients were employed in the Northeast Region and 32.3 percent in the Twin Cities Region two years on, perhaps an indication of a stronger connection between UMD graduate programs and local employers. 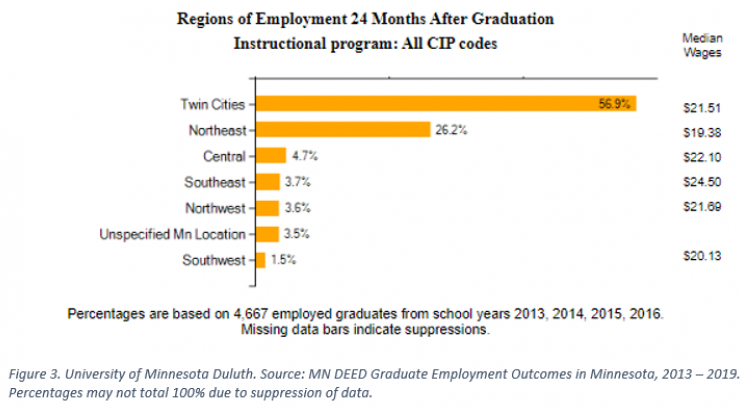