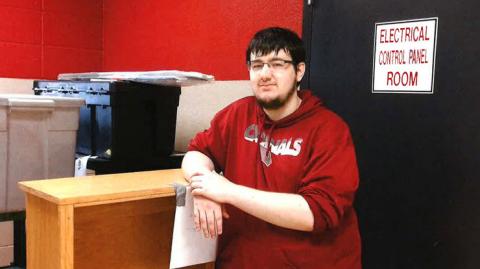 Sean first started utilizing CareerForce resources in 2016 when he was a high school student in Staples-Motley, where he was participating in the Minnesota Youth Program. Then, his mother decided to move from central Minnesota to Tennessee. Sean reports that in Tennessee “I continued working on my diploma, but it didn’t go so well or as planned and by the end of the school year I dropped out, as I had to get a job to make money to move my mom and I back to Minnesota.”

When Sean and his mother moved back to Minnesota in November 2018, Sean checked back in with his youth counselor, Karla, to get back on track for earning his diploma. Thanks to Karla “by the 20th of November, I was on work training again and attending the adult learning center to get my high school diploma.” Sean continued, “Karla talked to the adult learning center and I was able to get high school credits for my job, which allowed me to obtain my high school diploma on May 31, 2019.”

Sean then pursued training to receive his boilers license and eventually landed a full-time custodian job at the Staples-Motley school district on August 1, 2019.

Thanks to CareerForce, Sean says, “I was able to get job experience in a job I really like, was able to get my foot in the door and get a head start on entering the adult world and my future.”