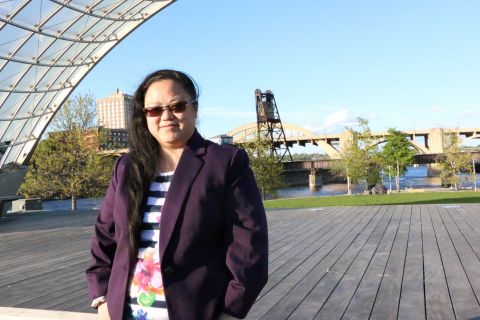 In 2005, Doua was laid off from her job. As a mom with six kids, she had to get another one fast. She went to a Workforce Center, as CareerForce locations were then called, and she landed a job. Fast forward to 2016-2017, Doua felt her job had plateaued with no further growth in her role. She was in a support role and she felt because she is a woman, and a Hmong woman in particular, and because she didn’t have a degree that her ideas and thoughts were overlooked.

So, Doua decided she would go back to school and enrolled at Dunwoody Institute. She was accepted into the Women in Technology Careers (WITC) program, which is supported by the Minnesota Department of Employment and Economic Development (DEED) Women’s Economic Security Act (WESA) grant. Through the WITC program, Doua met numerous women in IT and saw herself when hearing about how women are often taught to downplay their skills, be modest, and to lower her own value in the workplace. Hearing and meeting these women helped her change that attitude. Doua pursued an associate’s degree in Web Development, and when she got her degree, she became the first person in her family to get a college degree. Dunwoody was awarded a second WESA grant and Doua continued in the WITC program, completing another two years to earn her Business System Analyst bachelor’s degree-all while still working full time in the job she originally got through the Workforce Center.

Upon graduation, Doua had the degree and the confidence to go after a great new job in Information Technology at a new company. Today, Doua is a Senior Business Systems Analyst making approximately $92,000 a year, close to double her old salary! Doua mentioned that before, even buying McDonalds for her family was tough, it was like a luxury meal and it required a budget and saving up to give to her kids. Doua says this journey has changed her family’s life. McDonald’s is no longer a problem now, but even more, her kids have seen the transformation in their life and know that it is possible for them too. Her daughter is at Metro State University now. Doua hopes to open her own business one day with the skills she’s learned and is so thankful for the training she received. She is confident in her future.

Need help exploring in-demand careers or preparing for family-sustaining employment? Contact staff at a CareerForce location near you to get started!