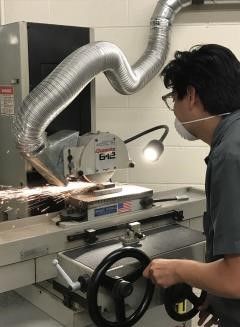 Even before the COVID-19 pandemic, many production helpers were already wearing protective gear on a daily basis. Production worker helpers carry out a variety of tasks on the factory floor, including loading and running machines, supplying materials, and cleaning work areas and equipment, so safety was already an important part of the job.

Most production worker helper positions can be started with a high school diploma or less, and instead rely on short-term on-the-job training. Physical stamina, attention to detail, and mechanical knowledge are all critical in these jobs, while the ability to read charts and gauges or knowledge of computer aided design software can also be helpful.

Half of all Production Worker Helpers in Minnesota earn between $12.58 and $17.90 per hour, with a median hourly wage of $14.62. However, both the Southeast and Northwest regions offered higher median wages – reaching nearly $17 an hour in Southeast Minnesota in 2020.

The vast majority of production helpers work in the manufacturing industry, with smaller counts getting placed through staffing agencies. Many of these positions can lead to other careers in manufacturing, such as machine feeders, press machine setters, machine tool operators, and even welders, all of which offer higher wages.

According to the most recent Job Vacancy Survey, there were nearly 600 jobs posted for production worker helpers in Minnesota, with a median wage offer of $15 per hour. None of these openings required postsecondary education, but employers did place a premium on workers with prior experience, with 21% of the openings requiring 1 or more years of experience. In addition, 85% of production jobs also offer health care benefits, compared to just 55% of all job vacancies.

If you are interested in more information about opportunities as a Production Helper, check out our Production Helper Occupation page here on the CareerForceMN.com website for wage ranges, educational and training requirements, current open positions in Minnesota and more.

Need help developing your job search strategy, updating your resume or preparing for interviews? Contact staff at a CareerForce location near you!