Welcome All Minnesotans to the Workforce 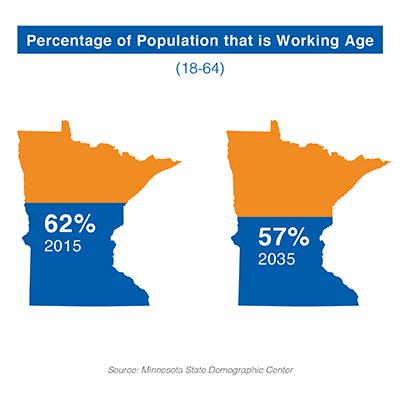 In order to meet our state's growing workforce needs, we must reach out to people historically underrepresented in some sectors and open the doors to good careers for all Minnesotans. CareerForce staff and partners play a key role in reducing disparities and encouraging equity throughout the state.

From now through 2035, the percentage of Minnesotans of working age will decline from 62 percent to 57 percent, due primarily to the large baby boomer population moving into retirement. In fact, an average of 73,417 Minnesotans are turning 65 every year from now through 2035, according to the Minnesota State Demographic Center. If we want Minnesota’s economy to remain strong, we must welcome everyone into the workforce so that businesses have the employees they need to thrive. 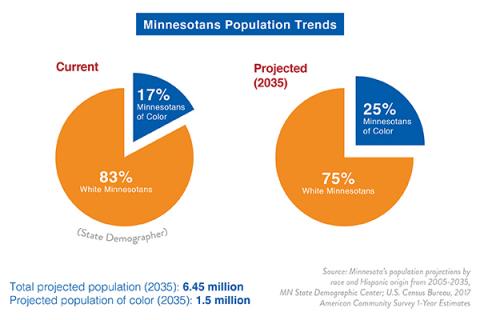 As people age, they are more likely to have one or more disability. Nearly 11 percent of Minnesotans have a disability, according to the U.S. Census Bureau 2017 American Community Survey 1-Year Estimates. However, this count is likely low because it does not take into consideration those living in nursing homes, group homes or correctional facilities. The likelihood of experiencing a disability goes up as a person ages. As the average age of Minnesota’s population continues to rise, a higher percentage of Minnesotans will have a disability. The unemployment rate for Minnesotans with disabilities was 7.4 percent in 2017, so there is an underutilized labor pool among those with disabilities.  Employers limit their talent pool if they do not consider people with disabilities when hiring.