Agriculture in Minnesota and the Metro Area 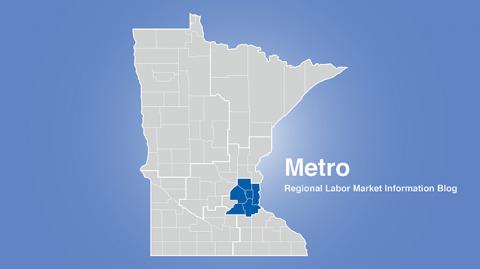 According to newly released data from the 2017 Census of Agriculture, Minnesota ranks 6th in the United States in agricultural production, with $18.4 billion in the total value of agricultural products sold. In total, the state had over 68,800 farms covering more than 25.5 million acres of land. Clearly, agriculture is a major pillar of Minnesota’s economy.

Typically, when we think of agricultural areas across the state, we may overlook the seven-county Metro Area. Because the Metro Area accounts for 61.2 % of Minnesota’s total employment, but only 14.5 % of its employment in Crop Production, Animal Production, and Aquaculture, this does make some sense. While agriculture does make up a much smaller share of the Metro Area’s economy, it is still a significant part of the regional economy.

As of 2017, the seven-county Metro Area had 3,743 farms covering nearly 665,000 acres of land. The market value of products sold equaled more than $611.4 million. The Metro Area region accounted for 2.6% of the state’s total farm land and 3.3 % of the state’s market value of agricultural products sold (see Table 1). Over one-third of the Metro Area’s farm land was located in Dakota County, with another quarter of this land in Carver County. Average farm sizes, in terms of acreage, were much higher in these two counties (277 and 230 acres, respectively) than for the rest of the Metro Area of 178 acres (and well below the state average of 371 acres). At the other end of the spectrum, Ramsey County had just 55 farms covering a total of 645 acres, ranking Ramsey County last out of the state’s 87 counties for total farm land. This makes sense as Ramsey County is Minnesota’s smallest in area and is nearly 100% urbanized.

About one-third (32.6%) of the Metro Area’s farmers are 65 years of age and older. As these farmers age, many are increasingly relying on migrant and other hired labor for help. Table 1 shows the share of farmers in each county that hire farm labor. Across the state, 28% of farmers hired farm labor. Breaking that down even further, 368 farms statewide reported hiring migrant labor, totaling more than 3,000 people.

The Work of Migrant Labor Representatives within the CareerForce System

Since the 1970s, Minnesota’s Migrant Labor Representatives have supported farmworkers by assisting them with job search, providing referrals to other community services and information regarding their rights as farmworkers. Four Migrant Labor Representatives assist both the farmworker and the farmers with services available through CareerForce locations in Minnesota’s key agricultural areas.