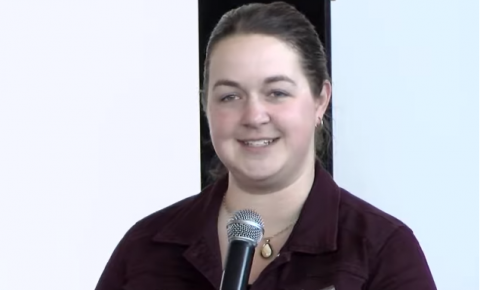 After being committed to a group home following a suicide attempt, Melissa applied for Vocational Rehabilitation Services (VRS) at the Department of Employment and Economic Development.

Melissa told VRS counselor Thant Pearson that she just wanted a job as an interior designer at Home Depot. After talking with Thant and taking some tests they realized that Melissa was a candidate to receive funding for college.

“Nobody I knew went to college so even the idea of where do you start, how do you apply, all of that was completely foreign to me,” Melissa said. “Thant was with me every step of the process.”

While Melissa was finishing her schooling, she met Steve Kuntz from VRS who helped her find a position as a student worker with the Minnesota Department of Transportation (MnDOT). Melissa did so well that MnDOT offered her a job upon graduating from school.

Melissa was promoted several different times at MnDOT. Melissa still keeps in touch with Thant and Steve telling them about major career milestones. Four years after finishing school Melissa wrote that she was promoted to acting bridge architect design.

“My first task as boss in this tiny department is to say thank you,” Melissa wrote. “The work that you do changes people’s lives, and I want you to know that your work does not go unnoticed by those of us that have been affected.”

To learn more about Melissa’s journey and how VRS and CareerForce can help people with disabilities find work, view our State of Success video.