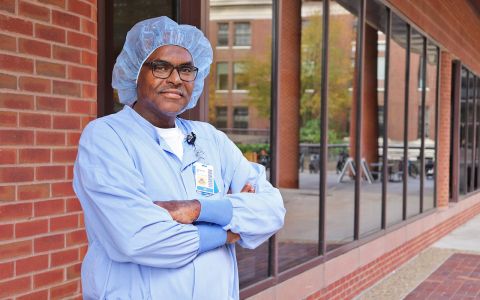 Mohamed fled his home in Somalia 30 years ago, surviving a terrible accident during his escape that left him with third degree burns over 30% of his body. He endured months on the road and in a refugee camp without proper medical care for his terrible injuries. When he finally did receive such care in Kenya, three months after he was burned, that care changed his life. A kind nurse who cared for him as he endured skin graft surgeries inspired him to someday provide such care for others.

Mohamed arrived as a refugee in the U.S. in late 1992 and studied to become a surgical technician and nurse. He began work as an operating room nurse at the M Health Fairview University of Minnesota Medical Center 10 years after leaving Somalia. For Mohamed, the job is a dream come true after a long journey that took him from working as a farmer half-way around the world to a career in health care in Minnesota. But it wasn’t the end of his journey. In 2018, Mohamed founded an international health care nonprofit with support from colleagues to provide medical supplies and training in Somalia, Ethiopia and soon Kenya.