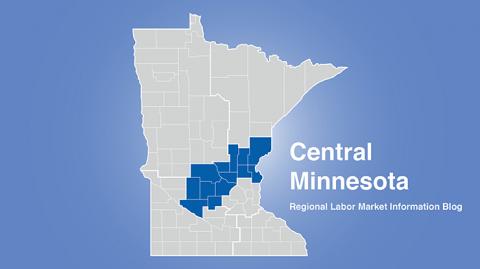 If you have ever thought about having children, you might have asked yourself: can I/we afford children? This common but difficult to answer question unfolds over two decades for many families as they raise their children from birth to adulthood. DEED’s Cost Of Living tool can provide a little insight into the typical costs for increasing the size of your family.

By way of definition, a family is simply having two or more related people living at the same residence. The dynamics of families can be complex or as simple as the broad definition, yet the financial implication of family formation is that each additional person in the family adds additional costs. In Central Minnesota, over three-quarters of families that have a child/children (18 years or younger) are married couples with an average median income of $102,021. The other 24 percent of families are single-parent householders, either female or male, with much lower incomes (see Figure 1). 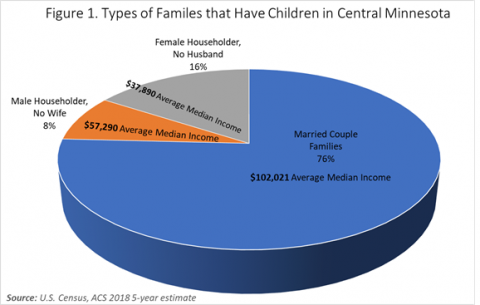 Both unmarried categories include families that have a single parent and at least one child, but can also include an unmarried partner (such as a boyfriend or girlfriend) all living in the same household. A full two-thirds of the unmarried families with children are a female householder with no husband present. There are 25,550 female householders in Central Minnesota, with have an average median income of $37,890, more than $10,000 short of the cost to meet basic needs in the region for just one parent and one child ($48,804). If the family has more children or has an unmarried partner, the cost increases accordingly.

Unfortunately, the data do not allow for a deeper understanding of the nuances of people living in each household at the regional level. However, it’s likely that national trends also apply to a significant extent in Central Minnesota, where the vast majority of children younger than 18 who live with an unmarried parent are living with a single mom. This makes intuitive sense based on the low incomes that reflect a single earner (not necessarily female) households and not dual incomes from unmarried, cohabitating parents. 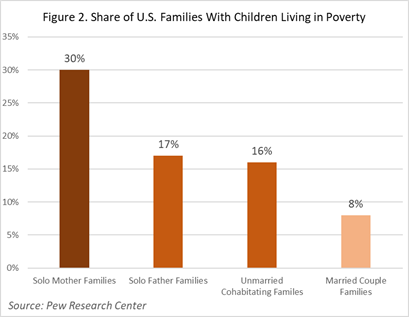 Thirty percent of solo mothers are living in poverty, a higher share than among unmarried cohabitating parents, who are typically younger and less educated. Nationwide about one-in-five children are living with a single mother.

Economic constraints at home impact other aspects of life, including the ability to maintain stable employment. Strategies to maximize labor force participation must consider how these socioeconomic factors impact current employment and the future workforce. For more information about the Pew Research Center data, check out this article: https://www.pewresearch.org/fact-tank/2018/04/27/about-one-third-of-u-s-children-are-living-with-an-unmarried-parent/